DoorDash has become a well- known name in the USA, and its growth has been disruptive, making businesses, as well as the people, wonder; what’s the DoorDash model, and how’s it doing so well.

DoorDash has, without a doubt, created a lot of hype in the market. Since its inception, investors have generously provided backing to this endeavor.

DoorDash has continually piqued the interest of investors, and it’s because of the success the company has had after its inception.  There is a steady rise in the popularity of the application. Even though there has been a lot of obstacles in the company’s journey, it has still maintained its appeal. The involvement of so many investors has allowed DoorDash to spread its wings and explore other avenues for growth. It is truly becoming one of the fastest-growing businesses. Know how much does it cost to build an app like Postmates or DoorDash.

This unique journey that DoorDash has had has made it an interesting study, and we’re going to explore various dimensions of the business. We’re also going to discuss what today’s environment means for the company. The Global pandemic that has taken the world in its grip has surely challenged businesses around the world to evolve and adapt to the current condition. We’re going to discuss what it means for DoorDash, and how the company’s future is going to be affected by it. So, without further ado, let’s begin.

DoorDash is an America based on-demand prepared food delivery service that was founded by four Standford students Tony Xu, Stanley Tang, Andy Fang, and Evan Moore in 2013. Since its inception, DoorDash has been on a roll.

The company has the backing by Y-combinator. Being a technology company, it uses user logistics to provide users with food delivery services from Restaurants.

Initially, the company began in Paulo alto, and since then, it has expanded to more than 4000 cities, and more than 340, 000 stores across America and Canada.

READY TO LAUNCH YOUR APP?

With Customized On-Demand Solutions by OyeLabs
Here are some of the basic facts about the company.

Now, let’s track the growth of the company in a timeline stretching from its inception back in 2012-13.

With a large selection of restaurants to choose from, users have a lot of options when it comes to eating. Users can see the top orders from customers in any restaurant and take their pick. With smart AI integration, users also get recommendations for new choices, based on their previous orders. Users can choose from all the options available and place their orders.

Once users have placed the order, the next step is to pay for the order. Based on the Restaurant, and the delivery location, the total charge is calculated. Users can pay through the app. When the users have paid, the order gets forwarded to the respective restaurant for preparation and packing.

When the order is ready from the restaurant’s side, delivery personnel (Dashers) pick it up and start toward the delivery location. Dashers can pick up orders whenever they have downtime using the app.

Users can track the progress of their orders thanks to the tracking feature available to the users on the app.

Dasher’s goal is to be as efficient as possible in delivering the order. The fee for delivery goes to the company, and the company pays dashers for their work. However, based on how the customer receives the dasher’s effort, dashers usually get tips from users. Users can also rate their experience with the dasher, the delivery, and the order, using the app.

It is basically how the app works. Users can order from the website, or through their app.

Before we explore how the DoorDash works, let’s first get familiar with some basics.

Here are some interesting facts about DoorDash

Now, as mentioned above, the company has a Y-structure business model. Let’s discuss the various components of this structure. 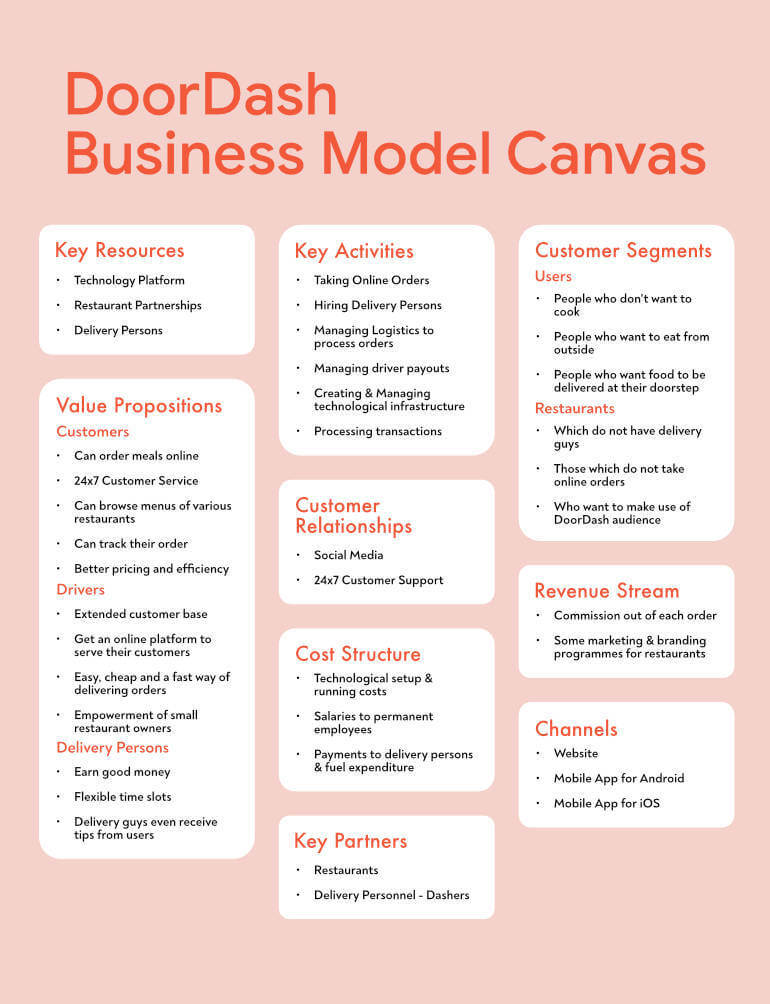 The Eateries are an integral part of the DoorDash workflow. These food places have a lot of different reasons to be with the app. Let’s see.

After Businesses, the segment has to be the users. Let’s see what comprises the user base of DoorDash.

From small to big, every eatery can benefit in one way or another from DoorDash, and this has been the secret behind the service’s popularity.

Now, here are a few of the service features that make DoorDash a popular option among its user base.

The customers also get dedicated customer support twenty-four-seven, which is a big convenience for them. The competent customer support of DoorDash has helped users and also DoorDash itself by helping it understand users as well.

Last, but by no means, at any least, are the delivery personnel, or the Dashers.

Dashers get a flat payment for their deliveries on a weekly bases and usually earn more than $600 (US). Tips from customers are a big part of Dasher’s motivation to work for DoorDash. Dashers can set their working schedule, and if they’re efficient, they are more likely to get great tips as well. It is easy to be a dasher, and the benefits are worth the effort.

Now, let’s take a look at the Revenue model of the company.

There are several ways in which DoorDash generates revenue. Let’s talk about these different methods of revenue generation.

DoorDash provides businesses with means to reach their target audience, without any added effort. It makes it possible for any user to order from their favorite food places, even if those eateries do not have their delivery systems. It is a tremendous service to the eateries that cannot afford to have a transport system or want to focus on their products rather than the transport.

For providing this service, DoorDash gets a commission from the business, which is usually around 20%. Eateries do not mind paying the commission, as it saves them a lot of effort.

DoorDash has an extensive transport network of its own, and it employs delivery agents, called dashers, to deliver various orders that are placed by the customers. These customers get payments by the company. Depending on their performance they also get tips from the customers.

DoorDash charges a commission from the businesses to get the orders to their customers. Along with that, DoorDash also charges the customers a delivery fee, which is anywhere between $5- $8. Through DoorDash, customers can order food from places that don’t deliver. With so many choices of restaurants and dishes and easy and innovative features, customers find it easier to use the app than to go through a lot of effort.

Along with the previous two services, DoorDash also Provides Advertising services to eateries. Although businesses are listed on the website and app for the users to see, they don’t get any preference and are dependent on the user reviews.

With DoorDash Advertising, businesses can come to the foreground of the process, and reach more people than before. It is a crucial part of DoorDash’s revenue generation as well, and it also provides businesses the opportunity to leverage the extensive reach of DoorDash.

This is how DoorDash generates revenue and has managed to come to the forefront to become the largest third-party delivery service in the USA. The growth graph of the company has been impressive, and it shows no sign of slowing down.

What the future holds for DoorDash?

In 2019, DoorDash became the most extensive third-party delivery service in the USA, getting ahead of GrubHub. It was able to do so thanks to constant innovation and smart business strategies. Being a technology company, Doordash tries to make the service as accessible to businesses as well as users. Its dedicated customer support is also a reason for its growing popularity. By the year-end of 2019, and the beginning of 2020, DoorDash showed no signs of slowing down.

In a time when businesses are finding it hard to navigate, and have little choice in terms of working, DoorDash has been making some moves to ensure that it can benefit as many businesses and people as possible.

The company confidentially filed for an IPO in February. During the epidemic, the company has been trying to help businesses stay in the workspace, ensuring a safe workflow.

Here’s what the company has been doing during the 2020 epidemic.

DoorDash has been trying to keep the local businesses going and has innovated to heed the call of times. It keeps growing, even amidst the ‘Cov*d’ epidemic. Services like DoorDash are going to have to adjust to carrying on through these challenges. DoorDash seems to be going in a hopeful direction with all its actions during 2020.

Want to know more? Read about on-demand delivery app development here How to build an app like Grofers

Q1) How much time does it take to build an app like doordash?

A1) Although the time required may vary depending on the features and complexity of an app, an app like doordash can be developed in approximately 7-15 days.

Q2) Can I customize my app once it’s done?

A2) Yes, once the delivery of the app is done , it is your call on how you would want to customize your app. We also provide customisation options for you.

Q3) Do I get to keep the code after development?

A3) Yes , once the app is ready the code is all yours however you will need a team at the backend for ensuring smooth functioning of the app.

Founder/CEO Oyelabs, he has helped 20+ founders in developing and making technology startup successful. FYI he loves home cooked food and curious about everything.

Have an idea for a mobile app?

Get ready to digitally transform your business.

Oyelabs aim to solve complex business and social problems using technology and want to enable individuals of the country to do the same.
[email protected]
(+91) 70425 81278

Copyrights © 2020 Oyelabs. All Rights Reserved.
We use cookies on our website to give you the most relevant experience by remembering your preferences and repeat visits. By clicking “Accept”, you consent to the use of ALL the cookies.
Cookie settingsACCEPT
Manage consent

This website uses cookies to improve your experience while you navigate through the website. Out of these, the cookies that are categorized as necessary are stored on your browser as they are essential for the working of basic functionalities of the website. We also use third-party cookies that help us analyze and understand how you use this website. These cookies will be stored in your browser only with your consent. You also have the option to opt-out of these cookies. But opting out of some of these cookies may affect your browsing experience.
Necessary Always Enabled

Performance cookies are used to understand and analyze the key performance indexes of the website which helps in delivering a better user experience for the visitors.

Analytical cookies are used to understand how visitors interact with the website. These cookies help provide information on metrics the number of visitors, bounce rate, traffic source, etc.

Advertisement cookies are used to provide visitors with relevant ads and marketing campaigns. These cookies track visitors across websites and collect information to provide customized ads.

Other uncategorized cookies are those that are being analyzed and have not been classified into a category as yet.